Having no luck with the flipper resistors, I went to the nuclear option regarding the heat buildup under the playfield, and installed 6 computer fans over all the holes on the cabinet to provide some airflow. Of course, it somehow had zero effect. So, as a last ditch effort, I ordered some PET-G to make a new playfield covering, thinking maybe the acrylic was the issue. To further correct some of the issues with my previous acrylic plastic, I took some rubbings on a large piece of paper and got it scanned at staples. 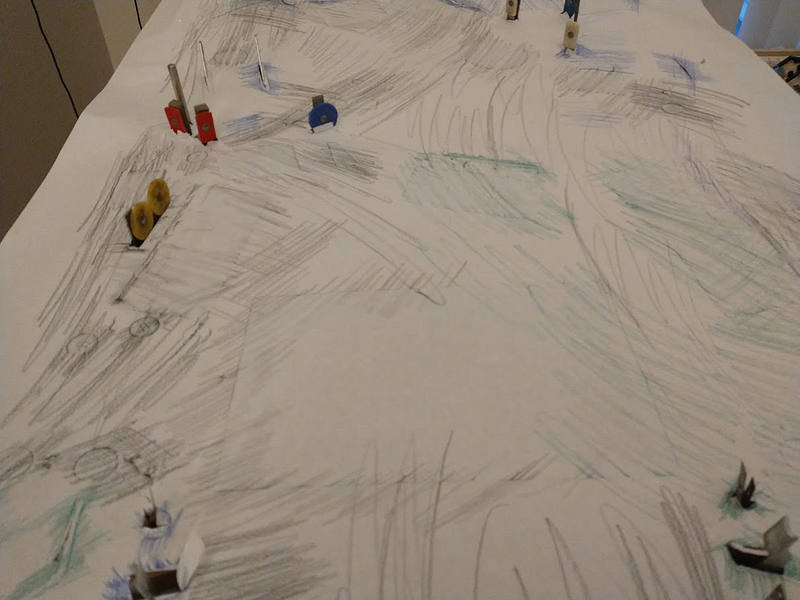 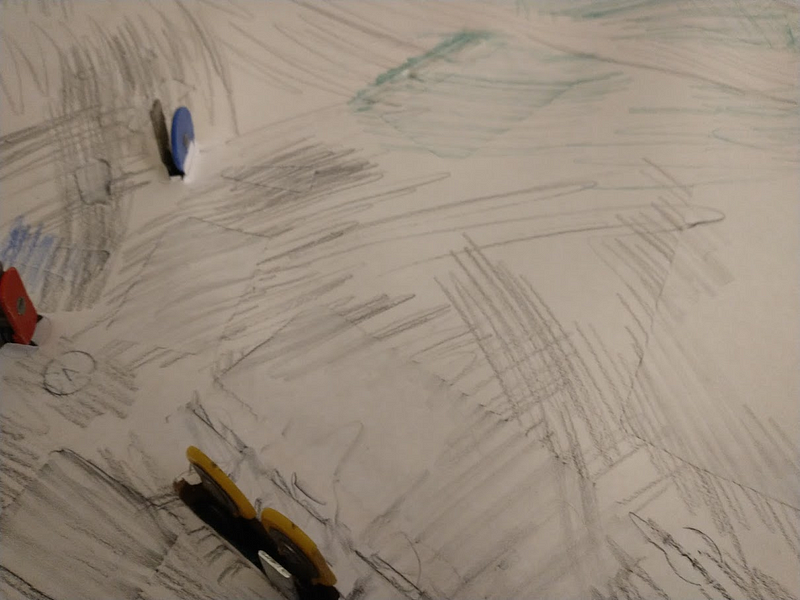 I'd done similar before with a piece of paper that I'd punched holes in to mark the positions of screws, etc, but some of those were missed or didn't come through well, and I'd also added the holes for all the screens since then, so I needed an update. Based on that, I made an updated CAD file: 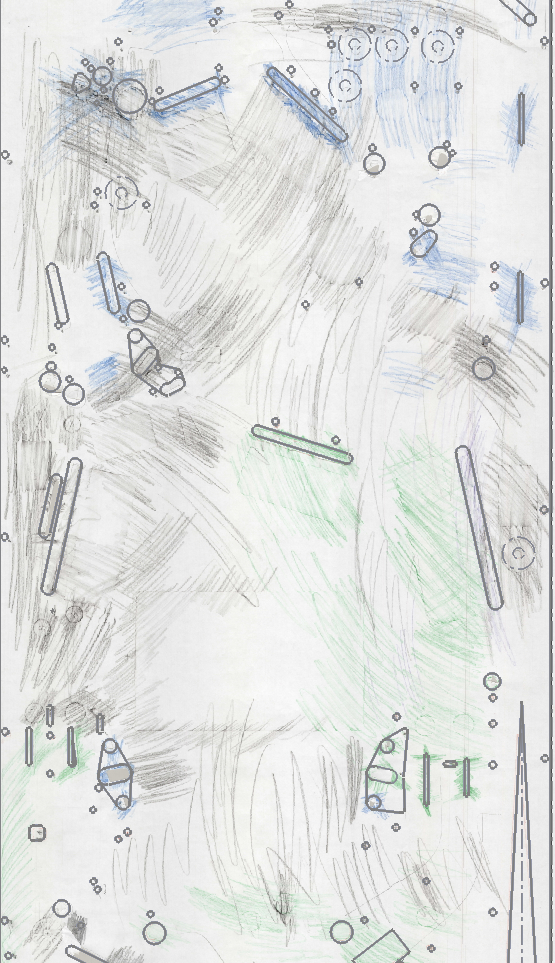 Sourcing the PET-G at a reasonable price was a bit of a pain, so I didn't want to waste it. Luckily, I found that I could make serviceable test cuts with my CNC router on plain paper, so I did a few iterations with that to fine tune things. The cuts weren't perfect (rough edges, occasional tears) but it was accurate enough to be useful 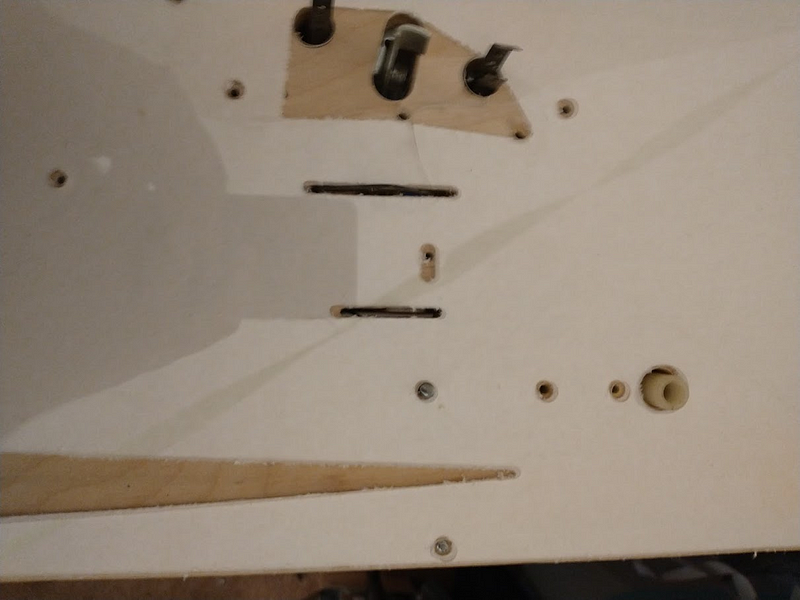 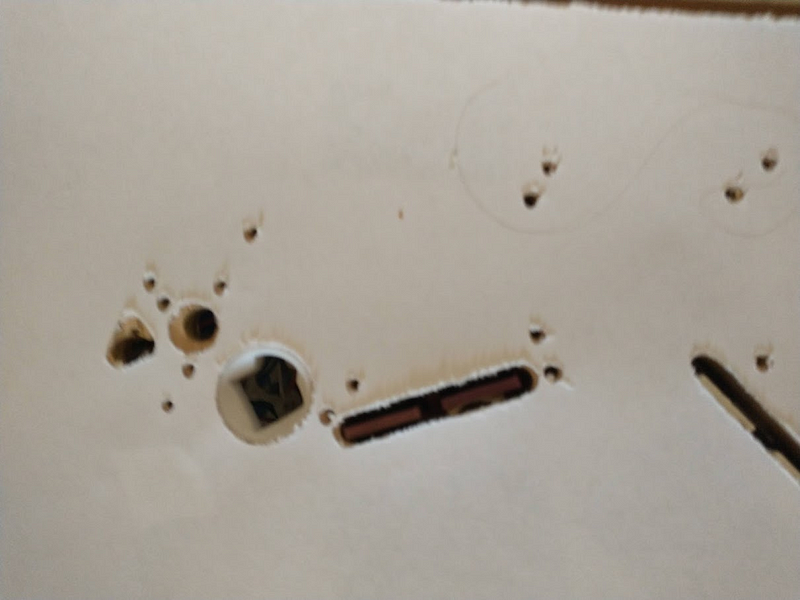 Once I was satisfied with all the positioning, I cut the full playfield in PET-G 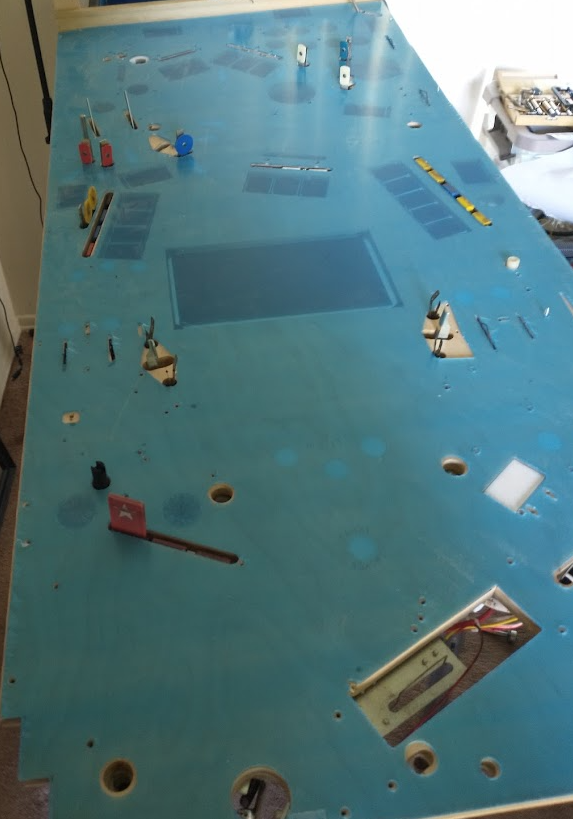 After reassembling everything again, I did a test game..... and the PET-G buckled just like the acrylic.

So I needed a new approach. Long term the clearest solution here is just to glue everything down, but I don't have any art ready yet and I'm not sure if I could apply and later remove the glue cleanly without damaging the wood. I'd been hoping to eventually cut a new playfield wood with the CNC, but as I continue to have problems with the depth of cut with the PET-G I don't have much confidence in getting that working quickly, so I'm still stuck with my original hand-cut plywood right now.

So I decided to go the other way right now, and instead of attaching everything down even better with glue to prevent the buckling, I decided to just attach as little of it as possible, and make a plastic more like the standard playfield protectors sold for other pins. The new protector would only be held down at three positions (the three posts closest to the center of the playfield), which should keep it from moving, while allowing the plastic to expand/contract as needed to keep from buckling.

Originally I'd rejected this idea when starting to experiment with the plastic covering, as I didn't want the ball to 'sink in' to the empty areas over the screens. But that was also with a thinner material. I'm now using 0.06" plastic, which is much more rigid, and doesn't seem to bend much as it supports a ball over the 9" screen even without being attached down at both sides, so I think it should still play fine. 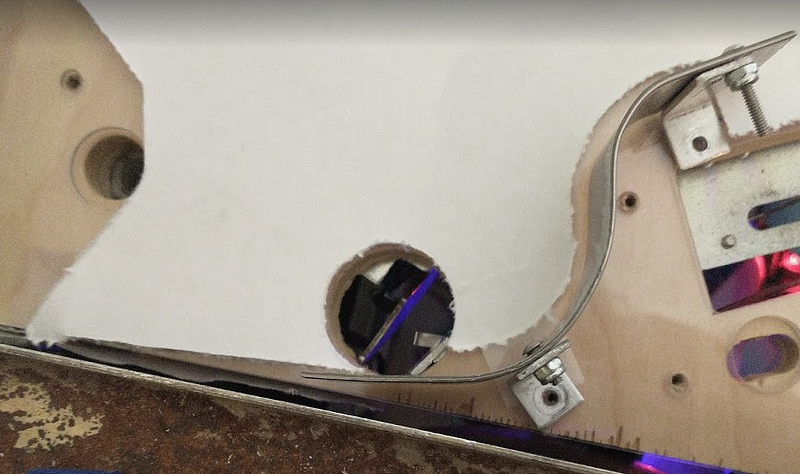 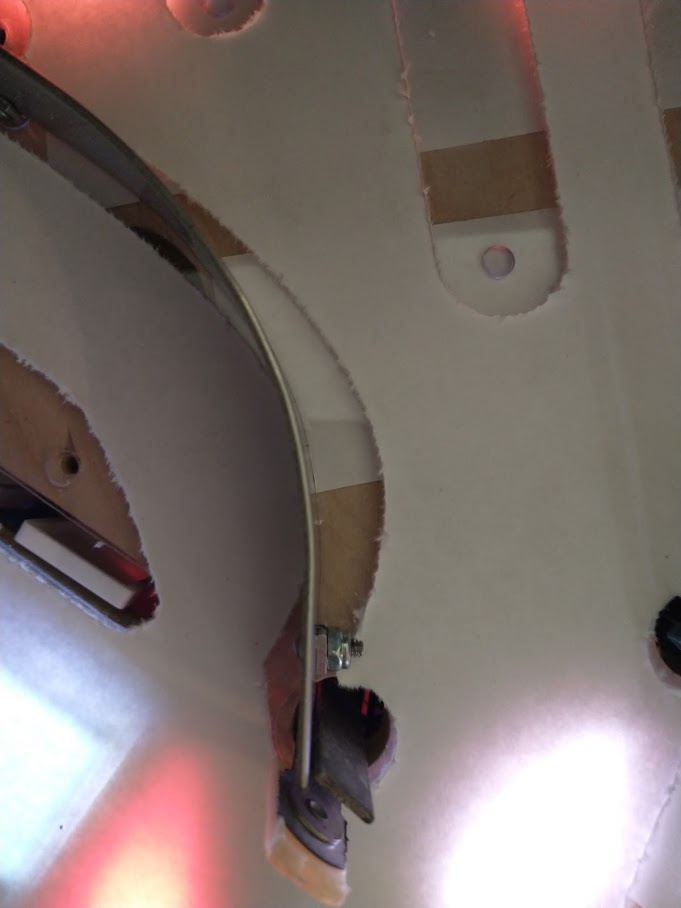 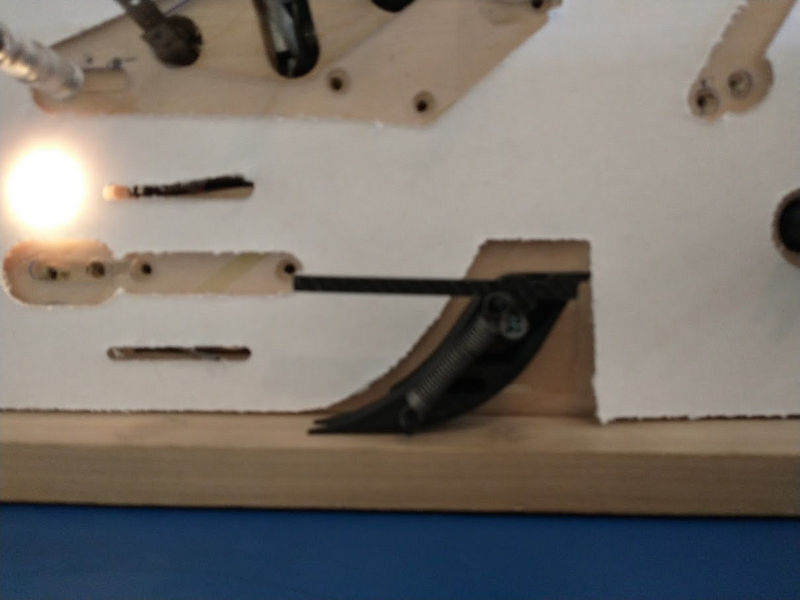 Unlike with the full plastic where I only needed to worry about the holes for the screws, here I need to match up to every contour of the ball guides, etc. Which of course I mostly bent by hand/eye and don't have any accurate digital files for. And of course I didn't think to etch them onto the plastic when I got it scanned either. Not a big deal though. I can give even 0.2-0.3" of space around the edges of things safely without affecting the ball (although it looks a bit weird), so I don't need to be super accurate here. And thus, I cut another sheet of PET-G. And also order 2 more spares since I'm now out of stock and I hate to wait for things to ship. 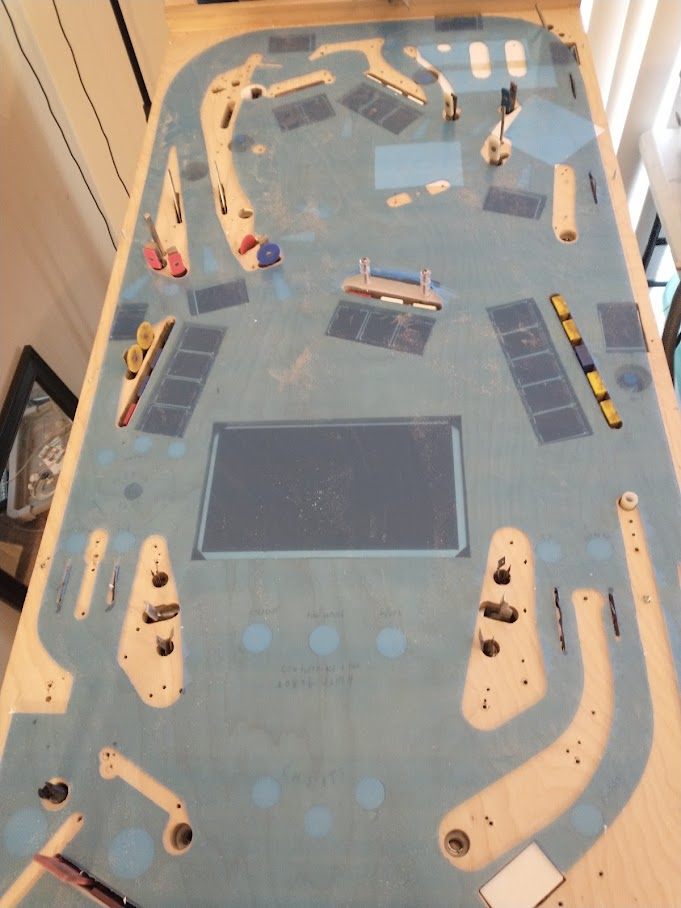 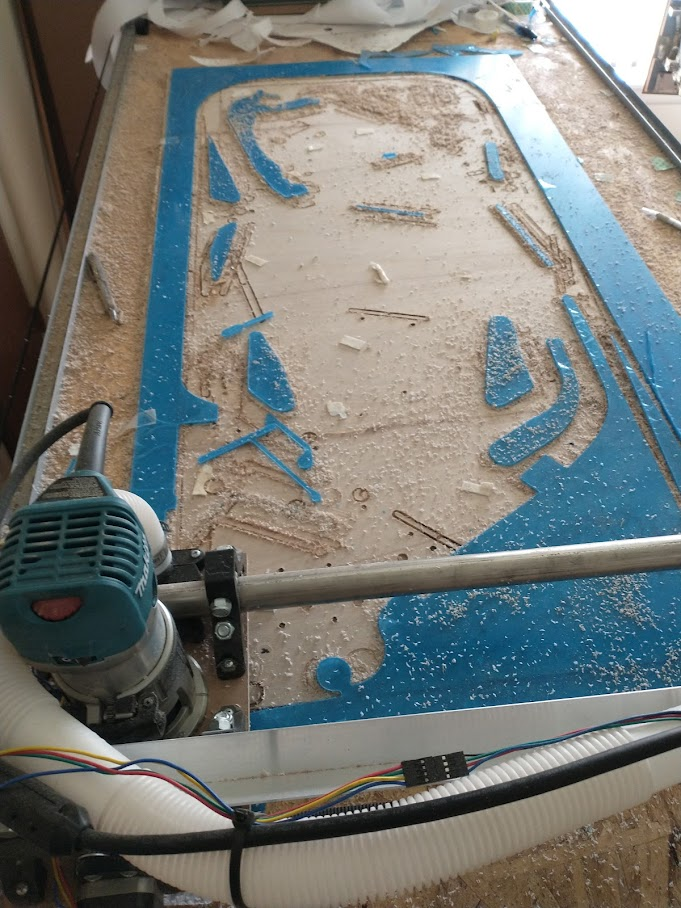 Some things weren't quite as accurate as I thought, but in the end there weren't any major issues. Only two places touched the edges of the plastic, and since it's PET-G it's easy to trim by hand 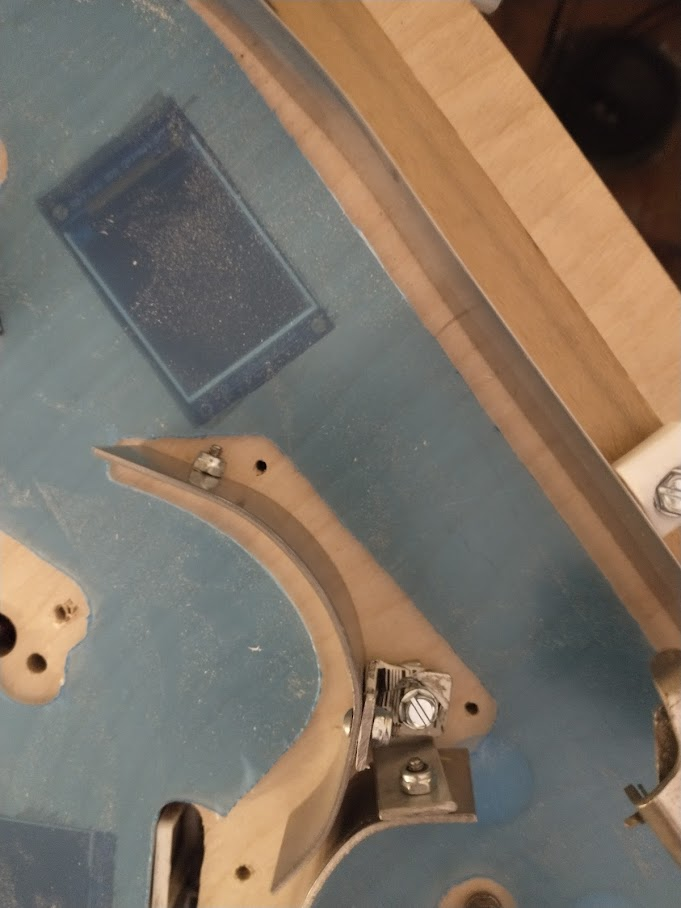 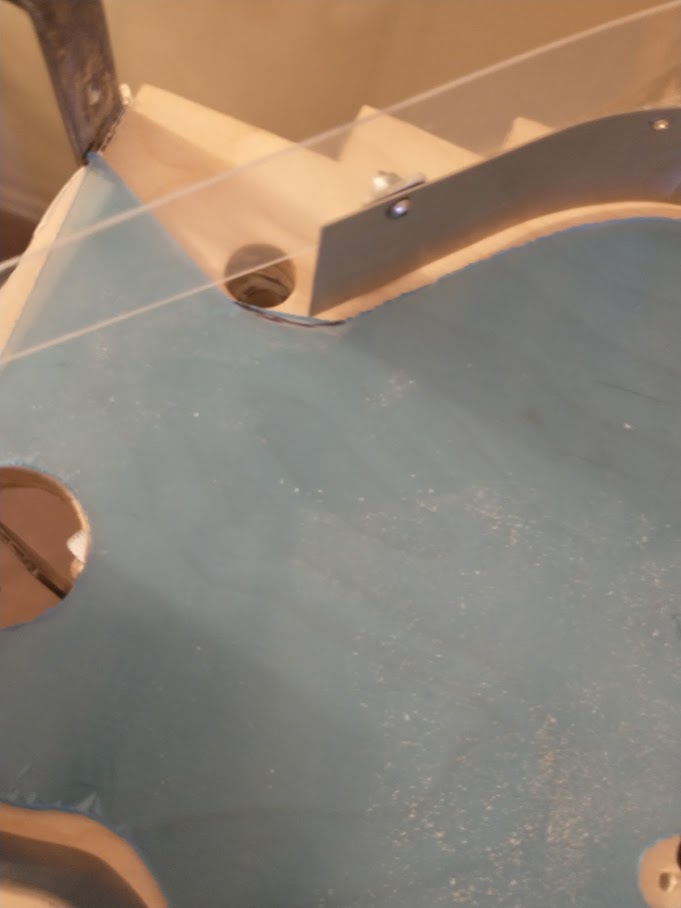 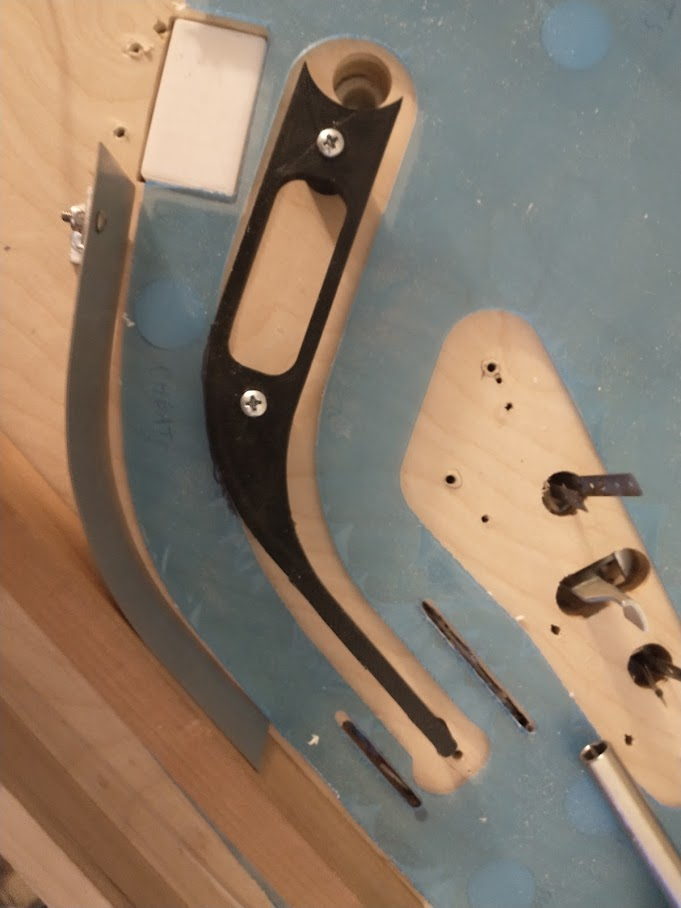 So now I start reassembling the whole playfield AGAIN to make sure that this still all plays fine. I'm fairly confident this should work though.