Overall, the game got approximately 400 plays at the show.... I think. Before folding it up for transport, I also coded in a bunch of audits and stuff so that, for every game played, it'd store a big data file full of stats, timestamped, for me to dig through later. By counting those files, I reasoned, I could get the play count easily. There's just one problem: it turns out the RPi doesn't have an internal clock. Whenever it boots, it gets the current time from the internet. And there was no internet at pintastic. So when that happens it just picks up where it left off, meaning that the first games played on Friday were timestamped at some time Wednesday when it was last connected to the internet, and the games on Saturday look like they came right after the ones on Friday, so I have no way of actually knowing exactly which games were played which days. I tried to reconstruct everything as best I could, so I think my numbers are pretty accurate, but it's annoying that I don't have perfect results...

Anyway, some fun stats:
- Total Games: 382. Of those, 345 were single player. 28 were two player, and a few three and four player. No one did a five player game
- Top score: 2,297,380, by 'OLP'. Congrats, whoever you are!
- Lowest score: -584,410. Even more impressive. I've never seen someone get half that low of a score. Sadly no initials were given for that game
- Average score: 400k. Pretty good. When I started writing the rules for the game I wanted 1 million to be obtainable, but not a 'gimme'. You should be excited when you get a million points! I think my balancing has done pretty well on that front. 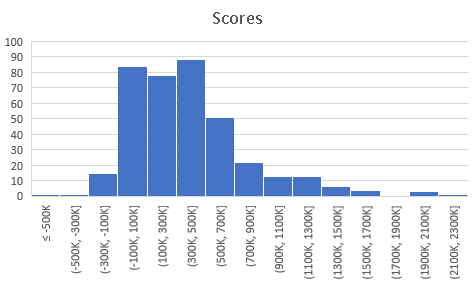 - Scores over 1 million: 32. That's about 8%, which would also put the 'replay' score right around there too, nice
- Most money lost: $4810
- Most money won: $5880, again by OLP. They must have been good at poker... This cash in also got them the 'Top Cashout' high score at 1,542,850. More than half their score from poker!
- Most hands won: 4. 4 is a pretty good game... I think the max I ever saw someone get during testing was only like 9, and they were familiar with the game and concentrating on just winning hands.
- Most hands played: also 4. So whoever played that 4 hand game had a 100% win rate, wow!
- Average cashout: 140k. This is slightly off since I realized that I had a minimum cashout of zero, meaning that anyone who lost points is going to be counted as just a zero, bringing the average up, but I don't think it'd affect it that much. Considering that the average score was 400k, I think this number is pretty well balanced. Maybe it should be a tad higher? I don't want the game's scoring to all come down to the end of game cashout, but also, it's Poker, you know?
- Average bonus: 50,000. This feels a bit too high to me, considering an average game is 400k. Almost half people's scores is coming from bonus? I'll probably have to tweak this a bit lower.
- Multiballs played: Hand: 84, Straight: 13, Flush: 10, Full House: 12. Nice to see that the three main multiballs all had similar play counts, but the discrepancy between 'Hand' multiball (the 'gimme' multiball for completing your first hand) and the rest is a bit higher than I'd like. When watching people playing, I noted a ton of people were lighting multiball but then not starting it. At first I worried they didn't know how to start it, but even when pointing it out, they still couldn't do it, so I think really the ramp shot is just way harder than I thought it was. I wish I'd made an audit for 'multiballs qualified' vs 'multiballs played', I'm sure it would be quite depressing
- Flubbed multiballs: 68. Also depressing... 68 of the 119 multiballs played scored zero points! I guess people just forgot to flip or something? There's no ball save so I know the multiballs can be short, but I'd expect most people to at least get to bat the ball around a bit. Similarly, not a single person got a jackpot in Straight multiball. I'd thought that one was easier than the jackpot for full house, but one person did get a nice 700,000 point jackpot from full house
- Most skillshots made: 7. That's a pretty good number. Again, I think the high ever was only around 9. Sadly this is counteracted by...
- Zero skillshots made: 232. That's not single skillshots either, that's entire games played where the player didn't make one skillshot. More than 50%.
- Biggest spinner rip: 58 spins. The average spinner rip is only around 20, so that's really amazing. Maybe they managed to combo it and get two hits in?
- Ball Times: 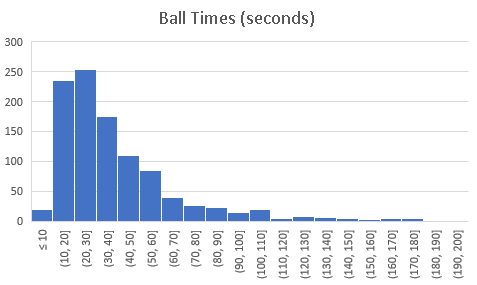 - Game Times: these were a bit lower than I'd hoped. I think optimally a game should last around 3-4 minutes, but the majority were shorter than 3 minutes. I'd put a lot of thought into trying to make the game easier for less skilled players, but couldn't come up with that many ways to do it without making it easier for more skilled players. A timed ball save would probably help here by just inflating the minimum possible ball time, but I'm not a big fan of them in games where you can plunge directly to a flipper, AND have savers on both outlanes to help you... 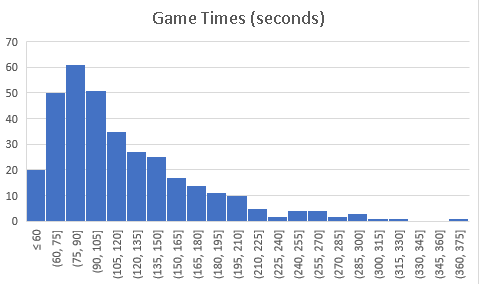 - Average poker hand win/loss: 1.47/1.05. Not bad. I guess at least some players are trying to play the poker a bit, otherwise I'd expect an even distribution
- Right outlane ball save used successfully: 68 times. Sadly this number isn't that useful without a 'number of right outlanes' audit, but it's nice to know that 68 people got to have the 'saved the ball using the popper' moment. When watching people play, this is probably the most exciting, successful moment that I saw
- Ramps shot: 99. Surprisingly low across 400 games, but people just seemed to have a ton of trouble lining up this shot for some reason.

And finally, all my audit data, zoomed out to fit on screen