With a month and a half to go until pintastic, I was in a pretty good spot. The game was working fairly well, I had most of the features done and lots of issues worked out. I figured it'd just be finishing touches and bug fixes, and I was actually ahead of schedule! So then I got to thinking if there was anything else I could do in the leftover time. One thing that'd stood out from testing is that my pencil-drawn instructions and labels on the playfield weren't readable enough for people to notice. So I figured maybe I could draw up some simple text boxes on the computer for those. Using some gottlieb EMs as reference, I found out what font was usually used, and tried to copy some of their basic styling, and I drew some stuff up in inkscape 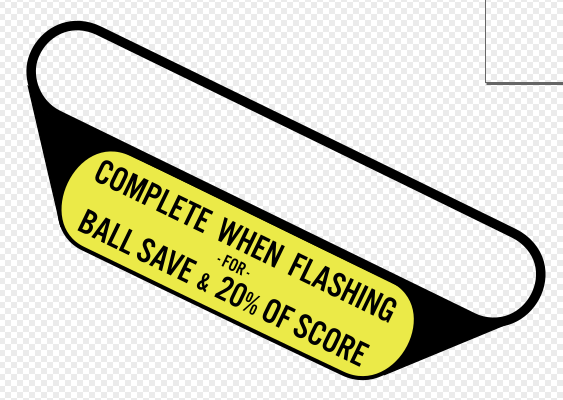 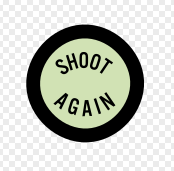 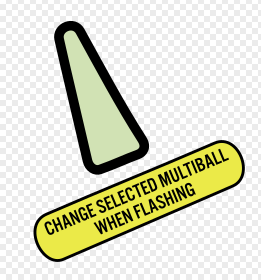 Those didn't look too bad! So I got a bit more adventurous with some of the other instructions I had. 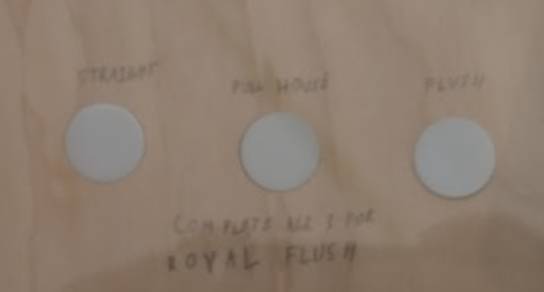 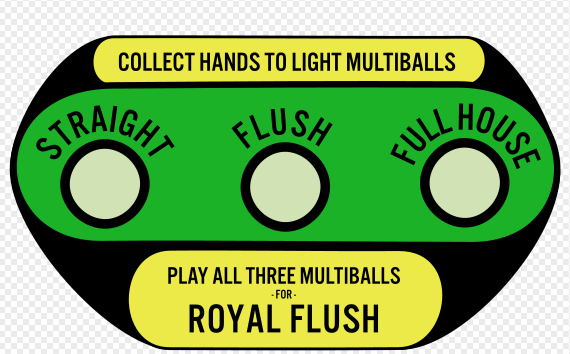 But I needed to figure out how to get those onto my playfield... When I first started drawing these I'd figured I'd just get some "clear sticker paper" from Staples, but it turns out that... doesn't really exist. I ordered a few things like projector transparencies and decal paper, but those also didn't work out. Everything ended up transparent still, not opaque ink on a clear background, so they didn't look too good 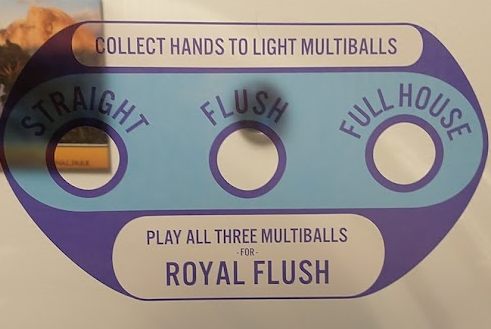 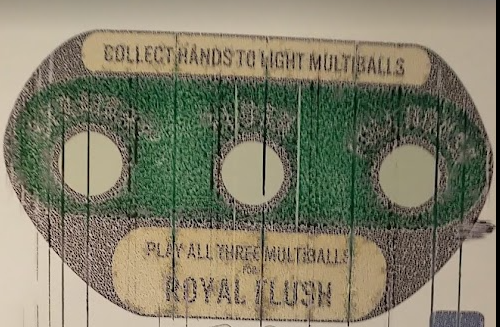 After a bunch of searching, I figured that what I really wanted might be "window decals" which... aren't decals. They're just vinyl stickers. I ended up ordering some from signs.com since they were the only site I could find that had an exact scale option. I got both decals and window cling, thinking that the decals might rip up the wood but the cling would have a weaker adhesion, but it turned out the cling couldn't stick to the wood at all, and the decal's stickiness wasn't too bad 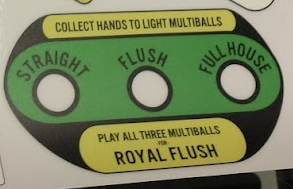 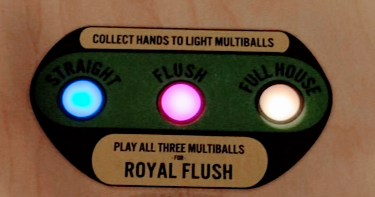 The decals went on fine though, and had pretty good 'blocking' so the woodgrain didn't show through, although some of the pencil was barely visible in some of the lighter colors so I had to go back and erase all that.

With that looking pretty good, I went ahead and spent a few evenings drawing even more instruction blurbs. And then got on a bit of a roll I did a few smaller things like keylines for all the inserts. And some graphics for the magna save, and around all the displays. And then I did all the major shots and lanes too because why not? 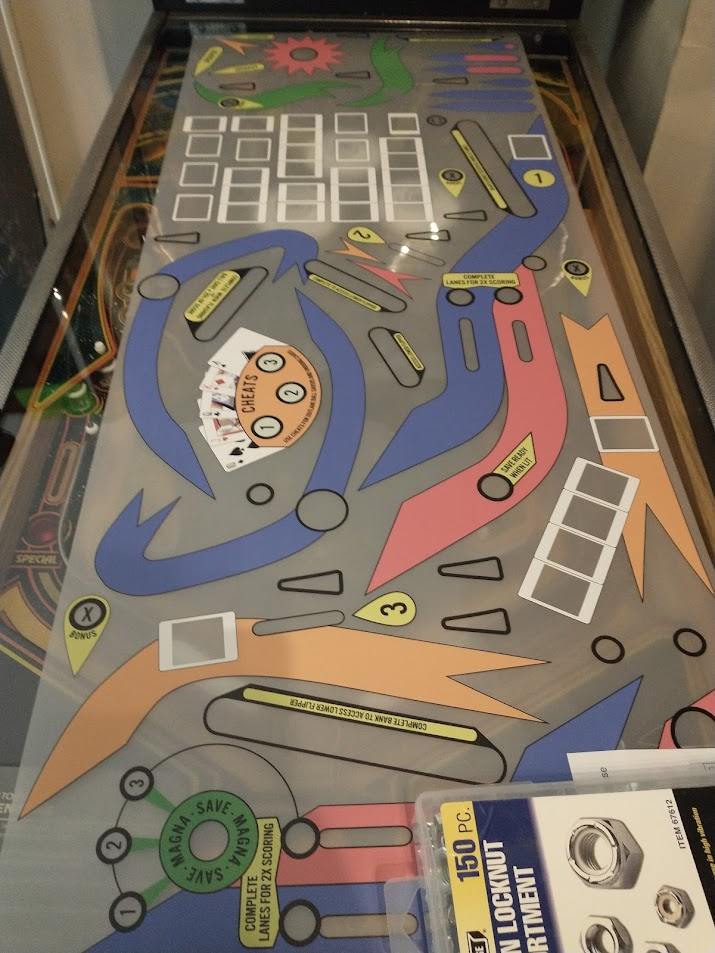 Now I had to tear down the whole playfield to install all these.... Most of the small ones weren't too bad. The larger ones (some are up to 20 inches long) got a bit more complicated though, especially the ones that needed to line up with lots of different playfield features. I'd never really done decal work before so I had to figure it out a lot as I went, but luckily they were forgiving enough that I could peel them off a few times to get them right before they started to loose their strength, and were slightly stretchy too so I could bend them a bit to line things up. That stickiness also became an issue though when I tried to put some over the displays, and the stickers started to sag down over the hole.

I ended up having to cut out some spare plastic sheets to cover the displays with in order to support the stickers. Then a new problem was revealed, as the backlights of all the displays had some light bleed that was showing through the stickers and didn't look too good, so I had to mask off portions of the plastic with electrical tape 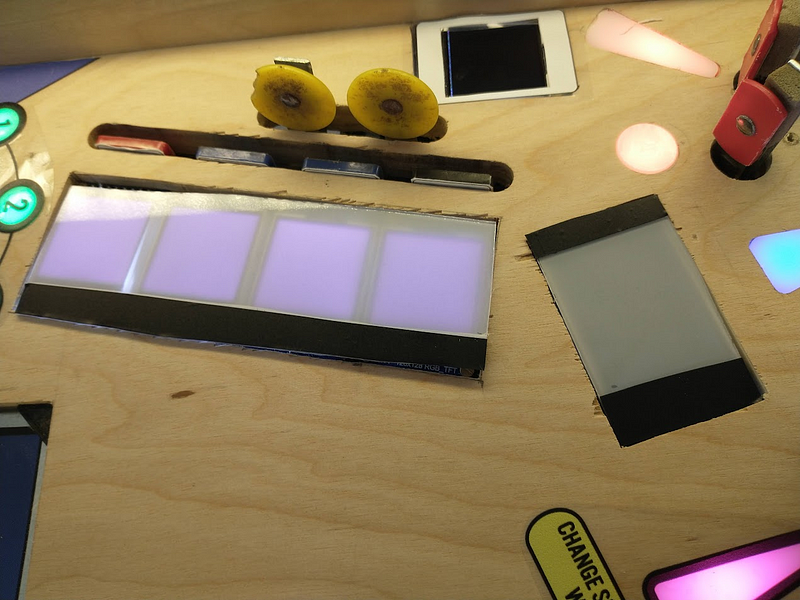 There was also a few issues with the center, clear portions of the stickers not adhering to the plastic perfectly, creating bubbles or trapping little bits of dust, so I also had to manually trim out the center portions with an exacto knife in some cases

The biggest challenge, however, was also the biggest sticker. Somehow this massive part, which I couldn't find some way to split up, didn't come out one-to-one scale, despite being in the same file as everything else

The piece should be 23x8", but instead it was 24x8.5". A small enough different that I didn't notice it during proofing, or when I got the sheet, until I cut it out and actually put it on the playfield. And since it was the biggest, most complicated piece, I saved it for last too At this point, there was under two weeks until pintastic. It'd take at least 2-4 days for another decal to be made, plus 3-5 days to ship, and I still needed to reassemble everything and do a bunch of final testing, so I didn't have time to wait for a replacement. At first I figured I'd just leave it off, but that one decal was basically a whole quarter of the playfield, so it was really obvious. In a flash of 1am, "nothing left to lose" decision making, I decided to just cut the whole decal up by hand and rearrange it to fit. 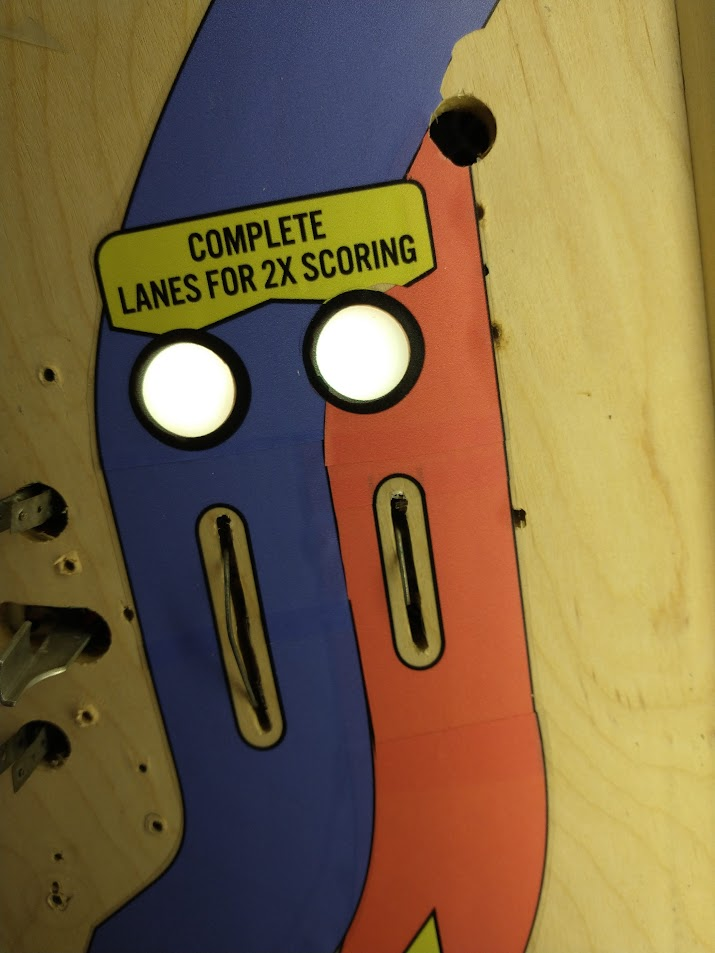 This went... much better than expected. In the end the one decal became 16 separate pieces, which I then cut apart, layered, and stuck back together so that all the keylines still matched up. Close enough! With the plastic protector over it you barely even notice. It'll be fun showing it to people and seeing if anyone asks about it. I've ordered the correct decal, along with a few other corrections too, so the next time I do need to tear the playfield down and get the protector off, I can replace it.

Since I was already ordering from a printing place, I also got some reverse-printed decals for my plastics 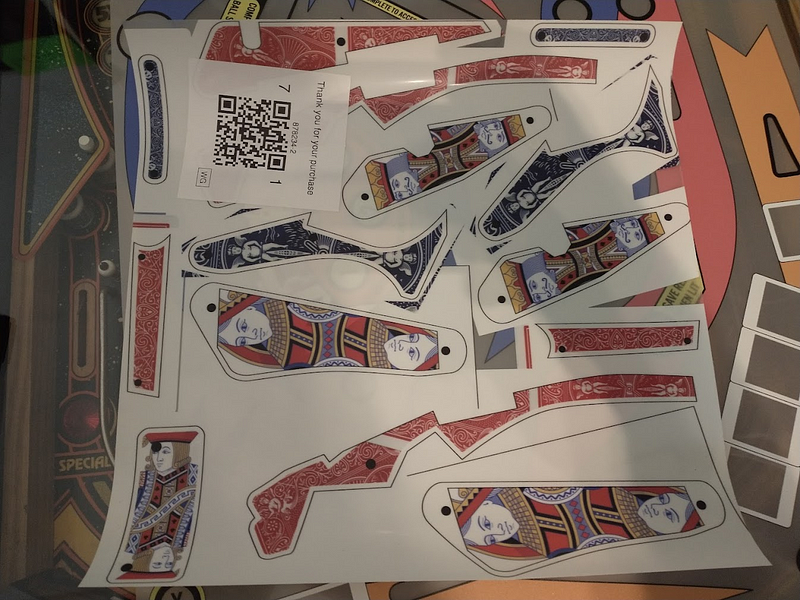 They weren't quite as vibrant as I'd hoped, but still much better than my inkjet-printed ones are. Plus they're adhesive, so the paper doesn't sag under the plastic. Before: 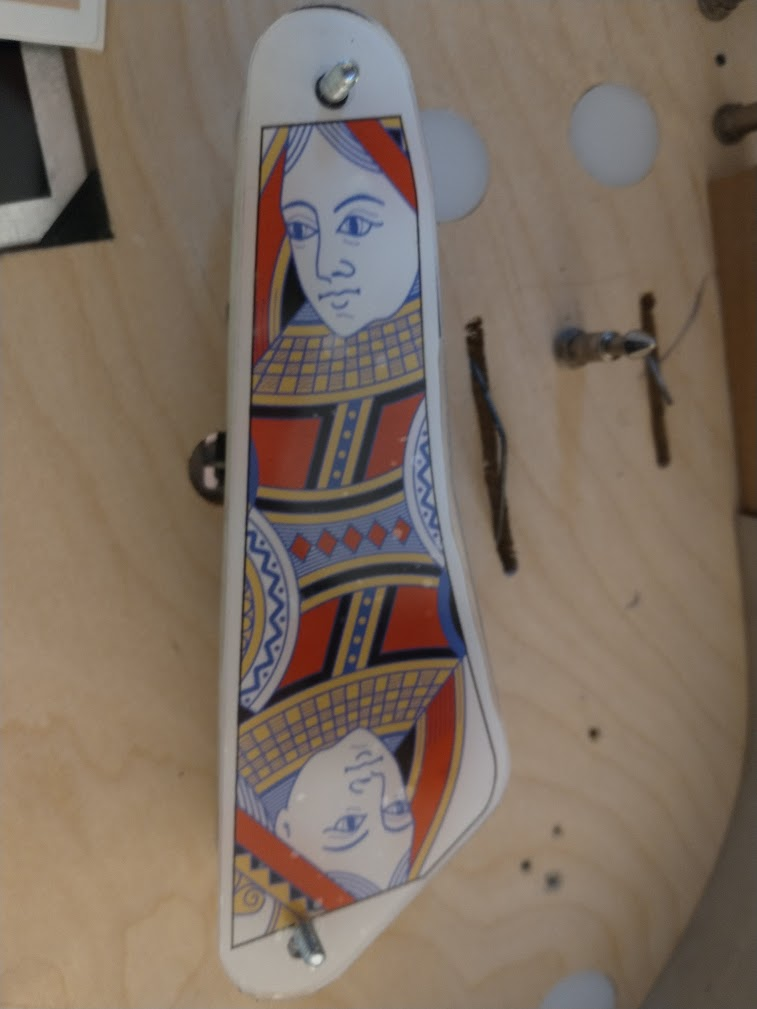 Aaaand... done! I wish I'd been able to come up with a few more bits of actual art besides the one hand of cards between the flippers, but I wasn't able to really find anything else that fit with the theme and art style so far. 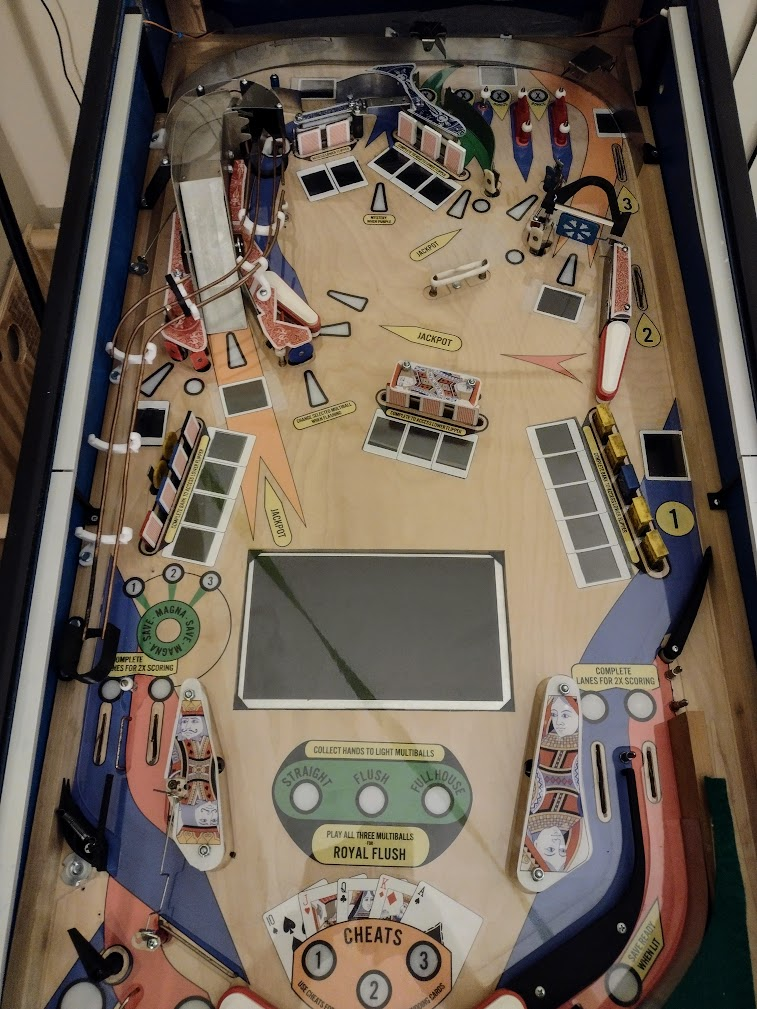 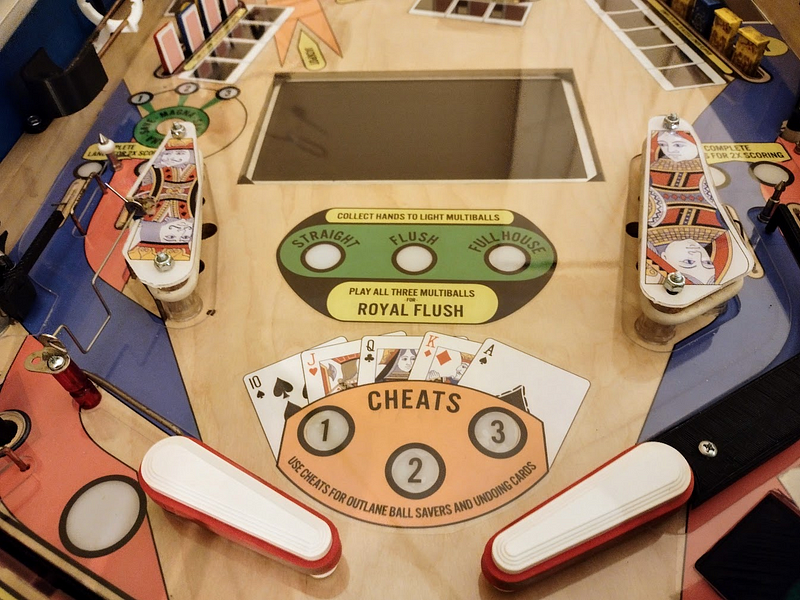 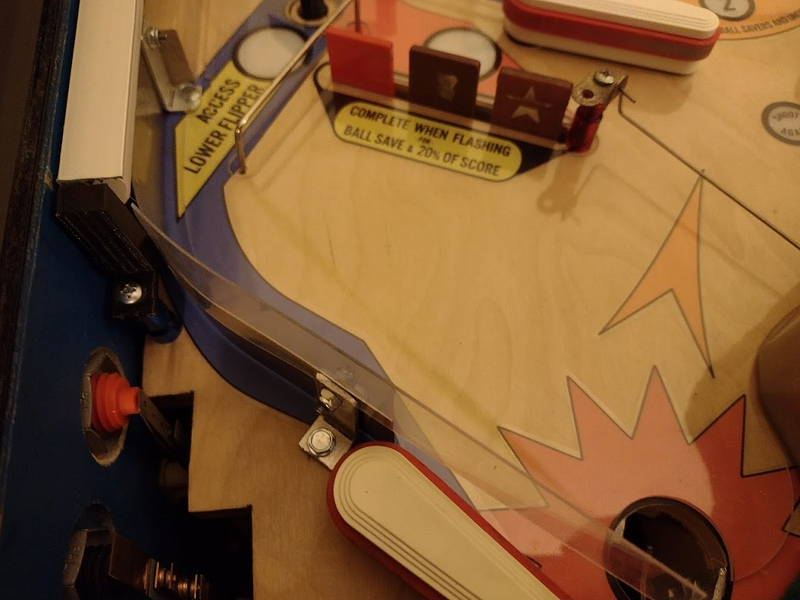 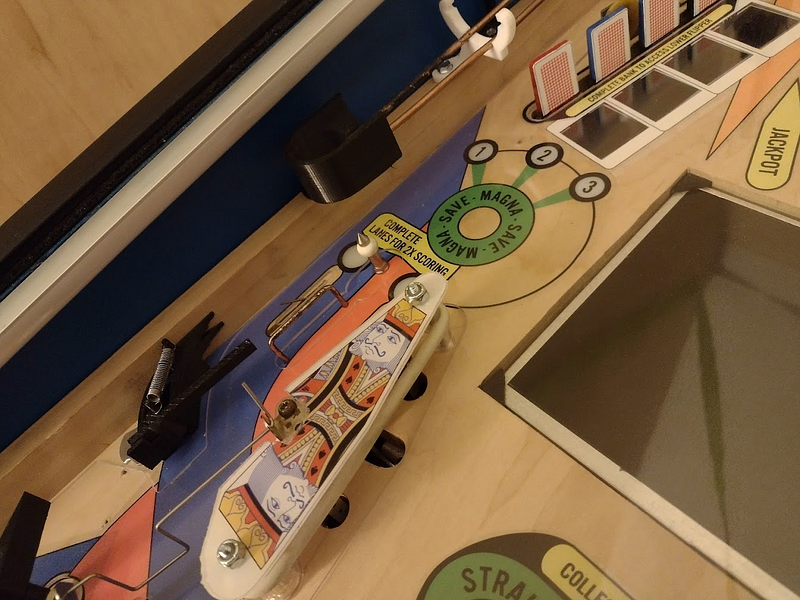 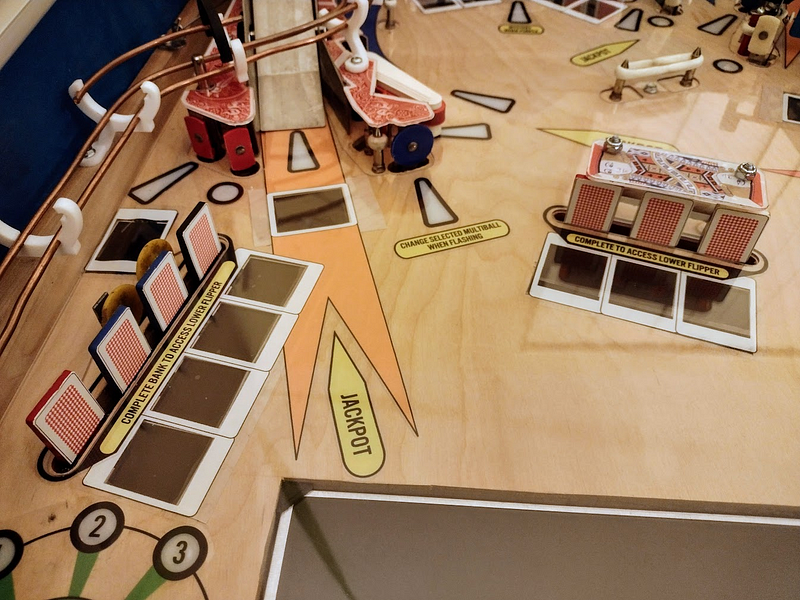 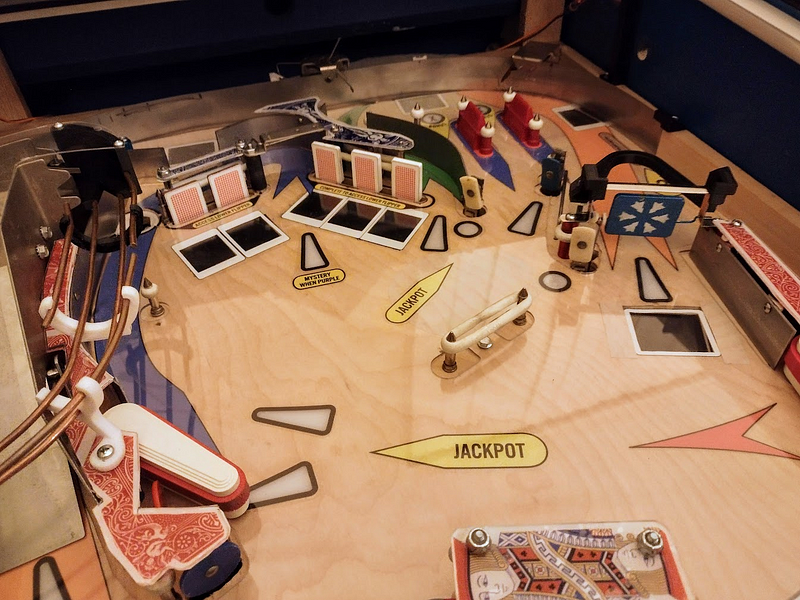 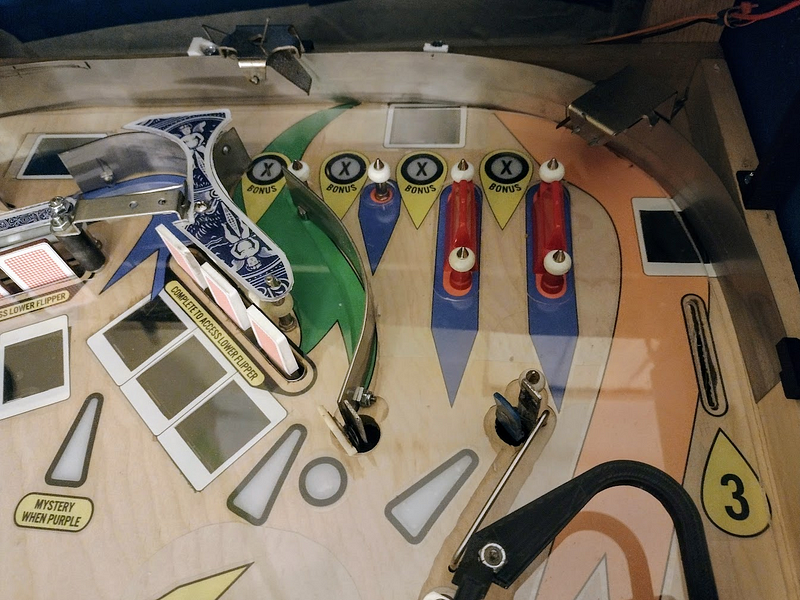